The medical informatics initiative will unfold in three distinct phases. The first began in 2016, and the last is slated to end in 2026. 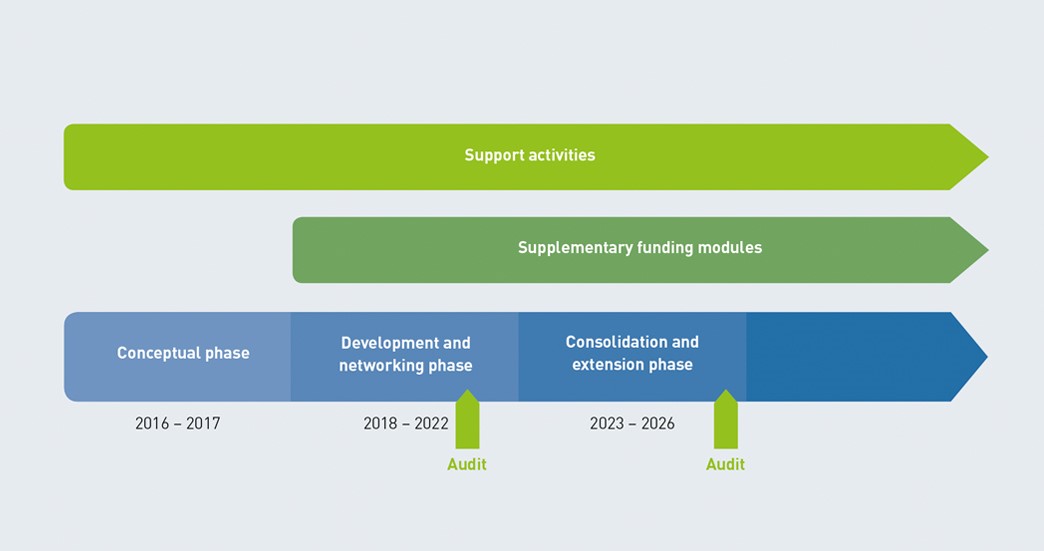 Before the data integration centres can be established, and IT solutions developed, a number of critical questions have to be addressed. Against this background, BMBF initially funded a nine-month conceptual phase. The most attractive concepts were chosen in July 2017 for implementation in the subsequent four-year development and networking phase.

The solutions that proved successful in the developing and networking phase can then be applied on a broader scale, and at other locations, during the consolidation and extension phase. There will also be additional funding modules at the same time as this phase. The national steering committee will provide guidance throughout.

The consortia created solutions for shared data use and exchange, worked on concrete applications for data exchange (use cases), and developed plans for data integration centres, to be implemented during the subsequent phase.

All groups are actively involved in cross-consortia collaboration and coordination via the national steering committee, and in various working groups.

In the four-year development and networking phase, the chosen consortia received funding to implement their solutions.

Each participating university hospital and, where applicable, other partners in the consortia established a data integration centre, and developed their IT solutions for the use cases.

Towards the end of this phase, the consortia were subjected to an external audit. This determined whether the groups had successfully added value for research or patient care, and verified that data exchange was possible between consortia.

The consortia were also expected to recruit additional university hospitals as network partners, paving the way for successful solutions to be shared at a later date.

The aim of consortia activities is to strengthen medical informatics in Germany. As an incentive to create new professorships, BMBF is funding junior research groups at universities that have committed to establishing these positions.

Cooperation between and beyond consortia via the national steering committee, and in working groups for specific topics, has been continued. Guaranteeing the interoperability of the IT systems, and the existence of uniform data security, protection and quality standards is vital.

Solutions that have proven viable will be made available to additional university hospitals, and potentially to other hospitals and research institutions. To ensure researchers, doctors and, ultimately, patients benefit from these advances as much as possible, further actors will be involved in data exchange. These could include outpatient care and private clinics, for example.